TEAGUE CARTER TRIED to ignore Hudson Ballard. Hell, he’d tried to ignore the bastard for the past … what? Two years now? Maybe three? Who freaking knows and who really cares. Regardless, it was getting more and more difficult as each day passed, but he wanted to think he’d done a pretty decent job all this time.

Until this fucking cruise, where he’d seen more of Hudson than he cared to.

Yup, Teague had mastered the art of avoidance or so he’d thought. But here on this stupid cruise ship, with the way Hudson was watching him, avoiding the man was damn near impossible. To the point that Teague simply wanted to punch him. In the mouth.

No, he had settled for drinking himself into oblivion and it’d worked. He could no longer feel his fingers or toes, and his tongue had long ago gone numb thanks to the whiskey he’d been drinking like water. Chasing it with beer helped, too. It’d been the only way he could handle watching Hudson talk to the guy he’d brought on the ship with him. Stupid asshole.

He peered over his shoulder at Hudson, noticing the big guy was watching him intently. Teague had the sudden urge to stick out his tongue, but he knew that was petty and childish, and he was doing his best not to give in to those impulses. Shit, he was twenty-five years old, for fuck’s sake. He could act like a grown-up when need be.

Still didn’t mean he liked the fact that Hudson had brought along a plus one on this trip. Teague was pretty sure someone had said the guy’s name was AJ, but he wasn’t positive. Nor did he give a fuck. What the hell kind of name was that, anyway?

He rolled his eyes and lifted his empty glass. Too bad the bar was closed already. Then again, the reception was over, which meant the private room would probably be closing soon, too. The alcohol was definitely helping to keep him from thinking about Hudson. In fact, he’d done everything in his power not to pay attention to Hudson and his new boy toy. The boy toy who had been signing to Hudson earlier and was now talking to Milly.

Did anyone else find that strange?

Gay guy. Straight girl. No matter how you calculated it, the math didn’t add up.

Damn. He’d obviously had far too much to drink, because it sure as shit looked like Milly and the guy were flirting it up. But that couldn’t be the case. The asshole was here with Hudson.

Mmm-hmm, that was what Teague had started calling him. It was a good name for him, too.

When his head started spinning again, Teague knew it was time to get to his cabin. He wasn’t sure how he was going to make that happen, but he figured he’d get there eventually. If not, he could always lie down on the floor and take a nap. It wasn’t like anyone would be worried about where he was or who he was with. Unlike everyone else on this stupid cruise, he didn’t have a plus one. He was rolling solo, like always.

“Son of a fucking bitch,” he muttered, holding his empty glass. No more whiskey and no more bartender meant heading back to his room was a definite must.

He managed to twist in his chair and get his feet firmly on the floor, but when he went to stand, the room started spinning again. He had to sit back down. Luckily, no one had moved the chair or he would’ve been on his ass on the floor, and he was seriously questioning whether or not he could’ve gotten up from that point.

Again, Teague pushed to his feet, this time remaining upright long enough to get away from the table. He started in the direction of the door, hoping he would make it. Right foot. Left foot. Right foot.

Wait, which foot was he on?

He looked up at the door. That was a long-ass way from where he was, but…

He stumbled again and grabbed the nearest chair. “If the ship would stop rocking, I’d be fine.” He wasn’t sure who he was talking to, but the words helped his tongue not feel so numb, so he continued to ramble as he pushed away from the chair and made another go at getting to the door.

Unfortunately, the door disappeared from view when a giant body stepped in front of him.

Now he had to deal with Hudson the Prick.

Teague instantly looked at Hudson’s hands as he signed. He had absolutely no fucking idea what Hudson said, but if he knew Hudson, it was going to be something that involved telling Teague what to do. So he replied in kind. “Thanks for the bit of advice, Dad.”

The next thing Teague knew, he tripped on his own foot, and the world tilted sideways. Just as he was gearing up to kiss the floor, Hudson’s enormous arms wrapped around him, keeping him from face-planting. Because he was too drunk to do otherwise, he allowed Hudson to get him to his feet by putting his arm around his back.

Then again, he always smelled good.

Something dark and woodsy…

Had to be cologne. The expensive shit, at that.

While Hudson guided him toward the door, Teague tried to ignore the heat that seared him from Hudson’s touch. He hated how fucking good it felt for someone to be touching him like this. He wasn’t sure anyone had ever attempted to take care of him or given a flying fuck whether or not he made it where he needed to go, but it seemed Hudson was doing just that. Sure, Teague had friends, kind of, but most of them would’ve laughed their ass off once Teague hit the ground. They wouldn’t have helped him by any means. And since he had no family…

Teague was distracted by Hudson’s scent.

“Why the fuck do you have to smell so good?” He tried to peer up at Hudson, wanting to look into those emerald-green eyes. “And why the hell aren’t you with your boyfriend?”

He knew better than to expect an answer from Hudson. The guy was mute; he couldn’t speak. If he signed a response, Teague wouldn’t understand, anyway. And truthfully, he didn’t want an answer to that. He’d done his best not to think about Hudson and that guy sharing a room, sharing a bed…

He shook his head, trying to dislodge the stupidity that was bouncing around inside his brain.

Hudson helped him onto the elevator, then pointed to the panel by the door.

Teague reached out and hit a button. Seven was a good number. It was random, sure, but that was because he couldn’t remember what floor he was on.

When they got to the floor, Hudson helped him out, still holding him upright as he led him down the hall. For some reason, this didn’t look like the right one, but Teague really didn’t know. His vision was blurry, so he couldn’t tell for sure. The carpet was different, maybe?

“Not my floor,” he mumbled, trying to remember what floor he actually was on. “Room number doesn’t have a seven.”

He felt Hudson’s arm tighten around him, and he got the sense Hudson wasn’t pleased with him, but he didn’t give much of a fuck. No, he didn’t give a fuck at all. The thought made him chuckle.

No fuck at all.

It seemed like forever before they finally made it to the right floor. It had only taken another detour on the wrong one before he got lucky. This one looked like the right place. And this—he reached out his arm and pointed—was the right door. Maybe. When they stopped, he noticed Hudson’s hands moving, but he didn’t know what Hudson was saying, so he frowned back at him.

Not wanting to touch Hudson any more than he had to, Teague attempted to stand up on his own. “Fuck. Why’s the room spinning so damn much?” And who stretched it? The last part he kept to himself because his lips felt funny.

He peered up at Hudson at the same time those penetrating green eyes glared back at him. He was tempted to ask him what his problem was, but then…

Son of a bitch.

No, wait. Not to the left. He wasn’t supposed to want Hudson touching him. 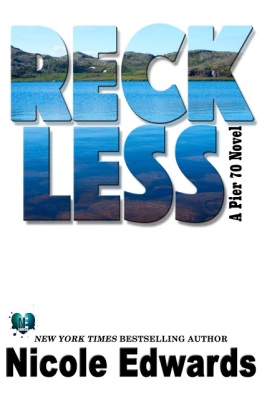 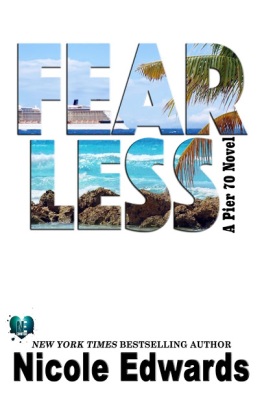 We invite you join the Nicole & Colt Edwards Group on Facebook. Don’t miss out on the fun and prizes at the Speechless Release Party happening Monday, June 7th starting at 8 AM CST till Tuesday, June 8th at 10 PM CST.
Hosted By: