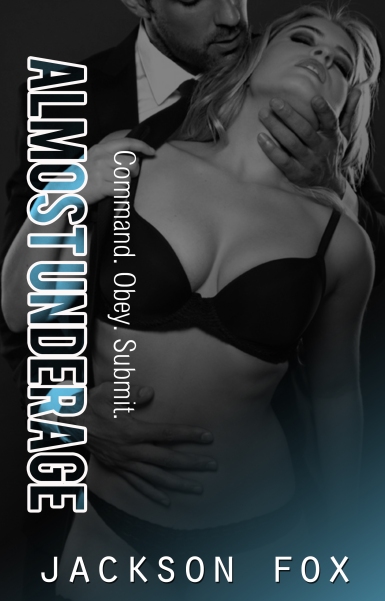 “Goodness, there are a lot of files,” I said, looking up at the wall in awe. The space was packed full of files from floor to ceiling. A small ladder stood off to the side, available for reaching the top shelf.

I looked at the stack in my hand. Sloan—or Mr. Barbosa, I had to remember to call him by his last name—leaned against the doorframe, his stare unwavering. It made me nervous. My heart beat like crazy, and my knees wobbled so much I feared I’d fall off the ladder.

But my new boss had given me a bunch of folders beginning with the letter A.

“Go on, Ashley. You aren’t afraid of heights, are you?”

I lowered my lashes to try to hide it when I looked at him. He was tall and looked as if he worked out, unlike my own lawyer father and a lot of other men in the judicial system I’d met.

Wearing fitted gray pants with a pristine white button-down shirt and a striped tie, he was walking sex. His dark hair swept over his forehead and the hint of a black beard was sprouting on his angular jaw. Beneath my blouse, my nipples peaked at the thought of how that five o’clock shadow would feel on my thighs.

“You are afraid of heights. Poor girl.” His voice was deep and shivery-good. It reminded me of Christian Bale’s in Batman. I’d sit on any jury just to hear him talk.

“I’m not afraid of heights.” To prove it, I placed one foot on the ladder. My heels were new, the spikiest ones in my closet. And apparently good enough for a job interview. I was now an employee of Barbosa, Jefferson and Frankfurt. Personal secretary to Attorney Sloan Barbosa.

Heat slipped into my stomach. I shot my boss another look before climbing to the second step.

As I ascended, he talked. “Have we met before?”

His eyes narrowed. They turned down slightly at the corners, giving him a sleepy air that was completely false. One look at his dangerous scowl and you knew he was wide awake and probably dreaming up ways to incarcerate his next victim.

As I reached the top of the ladder, I braced myself and read the A names on the files now at eye level. I slipped two into their places and searched for a place for the third.

Papers fluttered out, and I followed their momentum. Down, down to Sloan.

His gaze was fixed on my skirt.

My heart raced and a gasp slipped past my lips. Was he…? I glanced down.

Oh God, he was. The stud of a man was looking up my skirt. My pussy was instantly creaming with wetness for him. I’d had my eye on him at the holiday party last year, but I had been just a kid. Seventeen and never been touched.

Since then, I’d been with one boy. The memory of his inept groping was too disgusting to think about when I was in the same room as my new boss.

A man like Sloan Barbosa would know what to do with a woman’s body. With hands like those, he could work me into a frenzy.

He already was, and I was just standing on the ladder.

“While you’re up there, will you please check on another file for me?” His baritone raised a full-body shiver in me. I clung to the ladder.

“To the right. Anderson, Barry.”

“Looking now.” I shifted my feet on the ladder and stretched toward the spot. From the corner of my eye, I noted Sloan standing closer to the ladder than before, one big hand wrapped around the support. His neck craned backward and his eyes half-lidded.

I eased my weight to one foot, sending my hip outward and hoping my skirt slit opened a little more. What could he see, if anything? How was a man like him even interested in a cheap thrill like looking up the skirt of a woman as inexperienced as I was?

If I didn’t get off this ladder soon, I didn’t know if I could stop myself from rocking my cunt against the ladder.

I moaned quietly and began to descend with the Anderson file. When I faced my boss, he looked into my eyes. Deeply. The melted chocolate of his eyes made my pussy hotter. Wetter.

“Get back up there, Ashley.”

Oh God. His command did very bad things to me. My chest rose and fell with each harsh breath I dragged in.